Evidence that Bill Bohlke, former mayor of Hollywood Park, was killed by a donkey, but by a human!

The Bohlke's family is asking that the public get involved and call the authorities. Tonight, there will be a live broadcast on Kens 5 Eye Witness News into the matter. This is in an effort to Re-Open the murder investigation in the case of the former Mayor Bill Bohlke, allegedly killed by a donkey. There are too many inconsistencies in the case, but the authorities will not do anything to help the family.

For the first time, here are some of the pictures of the crime scene: 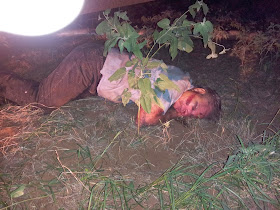 As you can see, the ground is undisturbed as Former Mayor Bohlke lies dead. Where are the animal prints on the ground? Even a piece of weed remains undisturbed. Highly unlikely if an animal attacked the former Mayor. What is that across his cheeks? Looks like the mark that a pipe would leave on the body, not a donkey. 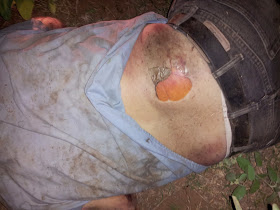 This is not a hoof mark from a donkey, this is a boot print on the back of Bill Bohlke! Unless the donkey wears size 10 to 12 in shoes, that is very unlikely caused by a donkey. Donkeys do not wear boots. 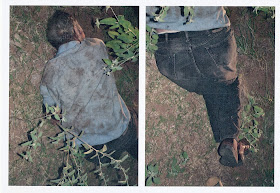 Several boot prints on the back of Mayor Bill Bohlke the night of his murder. Again, donkeys do not wear boots, humans do!

These  pictures should be very clear! The Sheriff of the Atascosa County needs to Re-Open an investigation.

Sheriff David Soward has these qualifications listed on his website; yet, he will not Re-Open a criminal investigation into the murder of Former Mayor of Hollywood Park Bill Bohlke, Why?

These are the Seven Questions that the family has for the Sheriff﻿ of Atascosa County:

1) If the donkey was found with large amounts of blood, where did the blood come from? Mr. Bohlke did not bleed!

2) If the donkey was aggressive as you stated in your statement, why did the clothing come back negative for any animal residue? A lot of animal residue should have been found.

3) If a donkey attacked Mr. Bohlke aggressively, why was the ground undisturbed? The pictures show no signs of animal marks on the ground.

4) If a donkey attacked Mayor Bohlke, why were there no bite marks on his body? DNA forensic evidence should disprove this theory.

5) If a the case was investigated by the Texas Rangers, where is the Report? The Rangers told the family no such report exist.

6) Have you question the two suspects, the men that went to buy the bull the day that Bill Bohlke was killed, after the family gave the information to the authorities? No one has been question by authorities.

7) Why did Mr. Bohlke not bleed after an aggressive attack by a donkey? After all, he was taking Plavix. Blood should have been everywhere!

The Bohlke's family deserve better! Mayor Bohlke was a hero, and the authorities in Atascosa County are not helping to solve this case. This is NOT A CLOSE CASE!!! RE-OPEN the investigation.
The Báez Law Firm, P.C. at 11:36 AM